When I posted the Advance to Mullaitivu on January 8th, the situation was roughly thus: 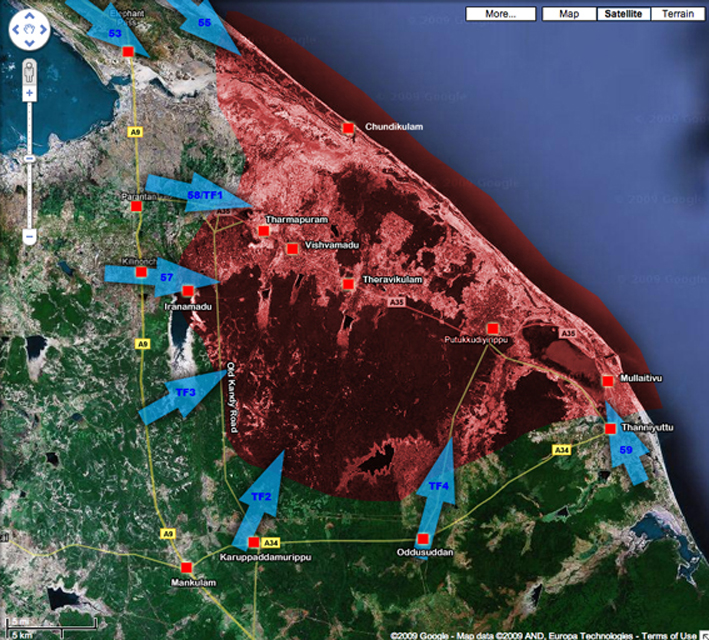 The 53rd Division had just taken the northern side of Elephant Pass, and the 55th was rolling down the northeast coast of the Jaffna Peninsula, squeezing the Tigers into the narrow Chundikilam spit. On the mainland, Task Force 1 — newly formalized as the 58th Division had sent a brigade up the A9 to secure the southern end of Elephant Pass before its other elements started pushing southeast down the A35 against the Tiger’s next line of defence. Further south, the 57th Division was pushing through Irananamadu and across the Old Kandy Road. This division was also in contact, as was elements of Task Force 3 on the 57th’s right flank. Task Force 2, between Karuppaddamuripu and Oddusuddan, lined up just north of the A34 was fairly static. On its right flank, Task Force 4 was in heavy contact in what looked like a probing or diversionary attack up the Oddusuddan – Puthukkudiyiruppu road. At the far right of the line, the 59th Division was fairly static as well, just south of Mullaitivu, though facing regular counterattacks.

My prediction at the time was that of a ‘left hook’ with the main thrust going down the A35, spearheaded by the 58th Division. It’s left flank would be protected by mechanized elements of the 55th, moving quickly across from Elephant Pass if the causeway was motorable. The four division-sized formations south of the 58th would apply pressure into the southern and western sides of the Tiger triangle, moving forward incrementally where possible to threaten the LTTE’s left flank as it defended the A35. The 59th, south of Mullaitivu, would apply maximum pressure against the tigers and act as a pivot for the entire line. However, Task Force 4 could still be used to punch up into the triangle’s underbelly, driving for Puthukkudiyiruppu if the 58th found its advance faltering. I predicted that the end of Phase 1 would look something like this: END_OF_DOCUMENT_TOKEN_TO_BE_REPLACED 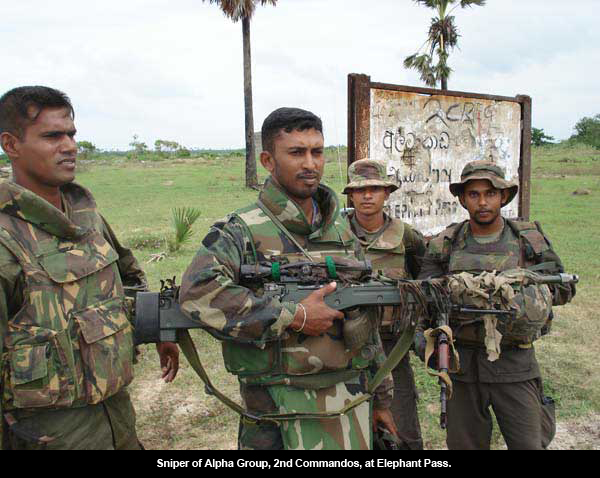 OK, this is the order of battle for the SL Army divisions tooling up for Mullaitivu. I have also included the 53rd and 55th Divisions on the Peninsula, because they’ve been involved in the strategic flanking actions earlier this month, though it’s unlikely they’ll see combat at Mullaitivu. I’ve left out the new Task Force 5, because it’ll be securing the A9, and won’t be used against the Mullaitivu triangle. For divisional positions, please see this map. This order of battle is still incomplete, and may have some errors. If anyone can correct or add to it, please do so via the comment section. Try and include a link that can verify the authenticity of the info if possible.

Disclaimer: All of this info has been gathered by analysing reports and articles available to the public. END_OF_DOCUMENT_TOKEN_TO_BE_REPLACED

The fall of Kilinochchi on January 2nd 2009 (see battle map), was viewed as unexpectedly quick in many sectors. Several military analysts, particularly B Raman and Col Hariharan, were expecting a titanic duel between the SL Army and the LTTE before the latter eventually relinquished their hold on their administrative capital. Even with Task Force 1 poised to take Paranthan by New Year’s Day, and the 57th Division driving into the southern flank of Kilinochchi, the writing on the wall hadn’t been read. With the A9 Highway towns of Paranthan and Iranamadu in SL Army hands, the Tigers risked a double envelopment from both flanks, with brigade-sized units sweeping round to cut off Kilinochchi. The LTTE would have foreseen this danger, and as the flanks crumbled, they withdrew swiftly towards Vaddakachchi in the east. After the heavy fighting on the flanks, the taking of Kilinochchi itself was relatively fast.

Both the 57th Division and TF1 continued the momentum, driving east and northeast of Kilinochchi, pushing the Tigers back so as to prevent an immediate counterattack. Elements of TF1 turned north and fought their way up to the southern edge of Elephant Pass. To the north of Elephant Pass, on the Kilali-Muhamalai-Nagarkovil line, the 53rd and 55th Divisions continued to apply pressure and force the LTTE to commit troops that could be valuable on the mainland.

Meanwhile, on the southern flank, TF2 and TF4 continued to make incremental gains across the A34 Highway linking Mankulam and Mullaitivu, with TF4 taking Oddusuddan on the 5th of January. The 59th Division on the east coast is currently the closest to Mullaitivu, in the Thanniyuttu sector just south of the Kilinochchi lagoon. This is a relatively urban area and the lack of manouver room means that the division cannot use mobility to envelope the defenders as was done in the advances up the northwest coast and across the Kilinochchi District. Any drive into southern Mullaitivu by elements of the 59th will mean slow and bloody fighting against the best of the Tiger units. On January 1st, a day before the fall of Kilinochchi, the 59th got a taste of this as the LTTE’s Ratha Regiment counterattacked and overran the 59th’s forward defence lines before being repulsed. END_OF_DOCUMENT_TOKEN_TO_BE_REPLACED