The eyes stared expressionlessly back at me from the fifteen small pictures, some clear, and some blurred; reflections that only hinted at the men behind those eyes. But sharp or soft, they all looked so innocuous, so devoid of any indication of what they had once seen. So normal. To look into those fifteen pairs of eyes, to read their names on the Wall that held thousands of similar names, was to gain no hint of the impossible acts of bravery that their owners had committed. Acts that would now see them join the eight who had gone before. Twenty-three names for twenty-three men. Twenty-three individual acts of supreme courage, selected out of twenty-eight years of war. The faces were tucked away in the second page of the Sunday Times, and I stared back at them for awhile before reading the short paragraph beneath each. The words were trite, cliched, dry; unable to capture the struggle of courage over fear that must have dominated each man’s last moments; the pain, the heat. And of course, that ultimate singularity, as they stepped forward and died. Alone. That solitude was also what singled them out, along with their courage, for none of them had done what they did as part of a whole, or at the order of someone else. They had each decided alone to do what they did, each for his own reasons.

At this year’s commemoration of the defeat of the Liberation Tigers of Tamil Eelam (LTTE), the government decided to award the Parama Weera Vibushanaya, Sri Lanka’s highest award for bravery (equivalent to the British Victoria Cross and the American Medal of Honour) to fifteen members of the Sri Lankan Armed Forces for courage displayed in combat and, almost without exception, conducted in the last two years of the war. Fifteen may not seem like a huge number, but to give you an idea of its significance, consider that since the PWV was established in 1981, it had been awarded only eight times in the twenty-one years that preceded the Cease-Fire Agreement between the GoSL and the Tigers. Therefore, for it to be awarded over a dozen times in two years is an indication of the intensity of the fighting after the CFA collapsed, and the sacrifices needed to destroy the Tigers; particularly in the last year of combat.

The Presidential Proclamation of 1981 that brought the PWV into effect states that the medal is to be awarded for … individual acts of gallantry and conspicuous bravery of the most exceptional order in the face of the enemy, performed voluntarily whilst on active service and with no regard to the risks to his own life and security with the objective of safeguarding thereby, the lives of his comrades or facilitating the operational aim of his force.

The twenty-three recipients of the PWV are all men and, with few exceptions, young. These are not generals or admirals. They didn’t command thousands of subordinates, or carry out great acts of strategy that would be recorded in military textbooks. Usually, they were in charge of less than a dozen men. Sometimes, not even that; being the youngest and most junior soldiers in their units. Only eleven of them, less than half their number, were officers. Twenty of them were soldiers. Two were sailors. And one an airman. Twenty-one were Sinhalese, one a Moor, and one a Tamil. And all of them are dead. In the eighteen years since the PWV was first awarded in 1991, not a single one of its recipients has ever lived to feel that medal’s weight on his chest or test the military code that requires even the Chief of the Defense Staff to salute, without regard to rank, the wearer of that 32-mm wide crimson ribbon. Some died leading attacks that would drive the enemy back to ultimate defeat; but many died in desperate rearguard actions to ensure that their comrades and friends retreated to safety; and at least one to save the life of a politician. As many of them died to save someone as those who died whilst killing the enemy. END_OF_DOCUMENT_TOKEN_TO_BE_REPLACED 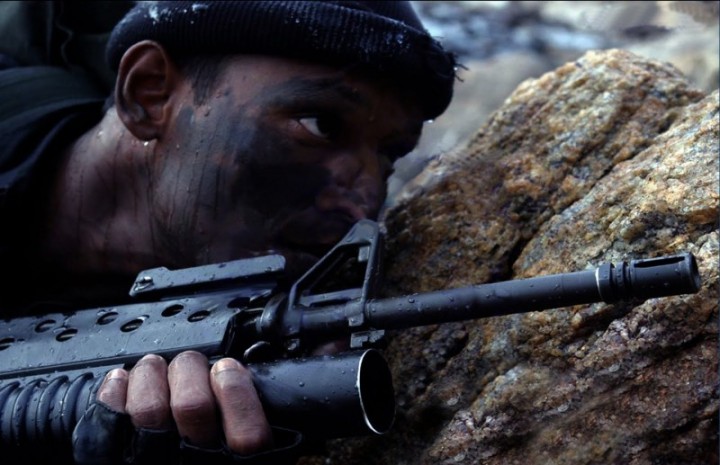 One of the more interesting presentations at the recently concluded seminar, titled Defeating Terrorism: the Sri Lankan Experience, organised by the MoD and the SL Army, was done by Brig Nirmal Dharmaratne, the Special Forces Brigade commander, on the use of special operations forces in the defeat of the LTTE. The Sunday Times ran an excerpt of the paper on June 5th.

As with most of the seminar’s presentations, this too concentrated on the SL Army’s experience rather than that of the defence forces as a whole, and Brig Dharmaratne stuck to outlining the contribution of the SL Army’s two special operations units — the Commandos and the Special Forces, running through their missions and the tactics and strategies employed against the Tigers.

Although both the Commandos and the Special Forces were originally raised with very distinct and individual missions in mind, Brig Dharmaratne’s presentation seems to indicate that both formations were used in mutually interchangeable roles ranging from strategic deep penetration missions to direct infantry assaults on Tiger strongpoints. Therefore, I too am going to simply look at both these elite units together, examining the roles they were used in both in the North and East, before examining them individually and comparing them to similar foreign special operations units and their roles.

Before I do that, let’s take a quick look at the original missions these formations were raised to conduct. When the Commando Regiment was raised back in 1980, the SL Army was a totally different organisation from the one we see today, and more importantly, so were the Tamil militants. The SL army numbered around 10,000 troops, and the terrorists a tenth of that. The soldiers carried unweildy British rifles and obsolete submachine-guns, with little or no armour, artillery or air support. The terrorists were armed with little better than pistols and submachine-guns and rode around on bicycles.

The Commandos were formed as a direct action and counter-terror force, tasked with raiding terrorist bases deep in the jungle that could not be reached by regular infantry units. It was also envisaged that the Commandos would be the dedicated hostage rescue team in the event of a hostage crisis, regardless of whether it happened within the theater of military operations or not. For this purpose, the Commandos were initially trained by former members of the British Special Air Service (SAS), and the Commandos’ role was more or less that which the SAS had had been tasked with during WW2 and in the ’50s and ’60s in Oman, Malaya, and Borneo; basically small unit raids that could not be conducted by larger formations such as the British Commandos and Chindits.

The Special Forces were raised in 1985, and clearly a different role was planned for them that was distinct from the ranger/raider-oriented mission of the Commandos. This was articulated as unconventional warfare operations in both urban and remote rural environments. This was a role closer to that of the US Special Forces, and one which the SAS too had adapted to; that of fighting as guerrillas, saboteurs, and in fact “terrorists”. In WW2, this role had mostly been undertaken by civilian organisations such as the British Special Operations Executive (SOE) and the US Office of Strategic Services (OSS), mostly because there were no military units trained or ready to carry out such missions. By the ’60s, however, the fledgling US Special Forces and the reinstituted SAS had taken on this role.

In spite of the fact that both the Commandos and Special Forces had seemingly distinct and separate roles to each other, the leadership of both formations ambitiously expanded their roles in the early ’90s, competing with each other for MoD budget allocations, until by the end of the 20th century, both formations were virtually indistinguishable from each other when it came to mission role. The Special Forces had even usurped the SL Navy Special Boat Squadron’s amphibious specialisation, eventually relegating that unit to a support role, much as the Commandos had once done to the SL Air Force’s special operations unit which specialised in air mobility. Both units were running long range sabotage and assassination missions, strategic and tactical reconnaissance, training indigenous units like the National Guard Battalions and the Civil Defence Force, maintaining a hostage rescue capability, and operating with former separatist organisations like the Karuna Group and the EPRLF. They were also often misused as shock troops when regular infantry units were unable to overcome Tiger defences, and this often resulted in heavy casualties among these elite troops. This latter role was very similar to that carried out by the US Ranger Regiments in WW2. As Eelam War IV approached, both the Commandos and Special Forces, either by necessity or ambition, were covering every aspect of infantry warfare, both conventional and unconventional. END_OF_DOCUMENT_TOKEN_TO_BE_REPLACED

In the closing days of March and the first week of this month, April, the SL Army outflanked, cut off, and destroyed the Charles Anthony Regiment of the LTTE, in one of the most decisive battles of the war. For almost a year, the SL Army, sweeping across the Wanni from west to east, had attempted to pin down the LTTE and cause it significantly large casualties. However, the ever elusive Tigers have always prefered to slip away when outflanked, rarely allowing themselves to be trapped in large numbers, sacrificing rearguard units so that the larger forces could escape. While the casualties came in trickles, the jugular sought by the military high command was not forthcoming. Thus, the encirclement and destruction of the Charles Anthony at Aanandapuram, east of Puthukkudiyiruppu, could be celebrated as a memorable victory for the SL Army.

However, what makes this defeat a catastrophic one for the LTTE is the fact that along with the Charles Anthony went almost every remaining unit commander of the LTTE, and many of their deputies as well. In a stroke, the Tigers have been virtually emasculated. The fact that the GoSL has now declared a 48-hour ceasefire over the Buddhist and Hindu New Year, is indicative of the SL Army’s confidence in defeating the LTTE in a matter of weeks rather than months.

On March 30th, elements of the SL Army’s 53rd and 58th divisions and Task Force 8 advanced out of Puthukkudiyiruppu in a pincer movement intended to outflank the Charles Anthony Regiment which held the eastward-running Puthukkudiyiruppu-Iranappaalai-Puthumaathalan road. A brigade of the 58th Division swung east and then south, while another from the 53rd, along with TF8, commanded by Col GV Ravipriya, attacked east and then north; both pincers meeting at Pachaipullumottai junction in the rear of the Charles Anthony. The Tigers fought fiercely to prevent the encirclement, but were overwhelmed. Lt Col Gopith, CO of the Charles Anthony and his 2/ic Amuthab were killed on the 31st, and demoralised and leaderless, the Tiger troops were encircled. Outnumbered nearly ten to one, over a thousand Tigers faced almost 10,000 troops of the 4th, 6th, 8th, 12th, 14th and 20th Gajabas, the 11th and 20th Light Infantry, the 5th Vijayabahu Infantry, and the 9th Gemunu Watch. Also in action was the SL Army’s elite special operations forces — elements of the 2nd Commandos and the 1st Special Forces. END_OF_DOCUMENT_TOKEN_TO_BE_REPLACED