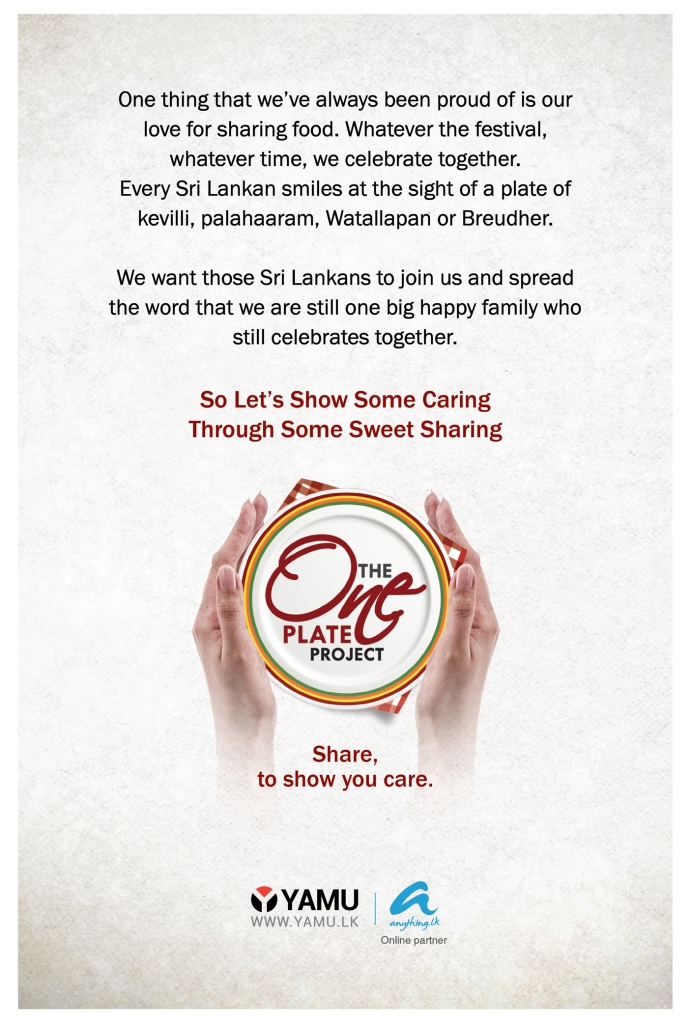 The One Plate Project is an initiative by Yamu and ad agency JWT to create a uniquely Sri Lankan practice online. During most religious and cultural celebrations such as the Sinhalese and Tamil New Year, Ramazan, Thai Pongal, and Christmas, people of all ethnicities look forward to the celebrations, regardless of whether that particular festival is one relevant to one’s community or not. And there’s one simple irreligious reason for that — Sri Lankans love food. As a Christian Burgher, I look forward to Avurudhu and Ramazan almost as much as I do to Christmas because I know there’s going to be a load of great Sinhalese, Tamil, and Muslim food coming my way from the neighbours.

In multi-ethnic neighbourhoods — mostly in Sri Lanka’s bigger cities, it is considered a common — and neighbourly — practice to send your neighbours — especially those from other communities — a plate of food if you’re celebrating something. So at Ramazan, some biryani and wattalappam is pretty much guaranteed; sweets and milk rice will be loaded onto a plate for Avurudhu; and at Christmas, thick wedges of breudher are piled onto plates and dispatched to the neighbours. Everyone gets to enjoy everyone else’s party. What makes this doubly cool is the fact that no one wants to return an empty plate to its owner, so usually there’s a frantic scramble to find something tasty to fill that plate for its return journey.

This is precisely the experience the One Plate Project replicates in a virtual neighbourhood. Hosted on Anything.lk this Avurudhu, the project allows you the chance to buy a plate of food — ideally one belonging to your community — and have it delivered with a personal greeting to a random person from another community. In return, you yourself will receive a surprise plate of food from some other neighbourly stranger off the net. How it works is that one selects one of four plates, each belonging to one of the four major ethnic communities of Sri Lanka — Sinhalese, Tamil, Muslim, and Burgher — and pay for it. All plates are priced the same at Rs 500. That’s it. Your address will be saved on the site, and on delivery day you’ll receive something in return.

The project was launched by Yamu and JWT this New Year, and is planned to run throughout all the major festivals for a full year, culminating next year with the Sinhalese and Tamil New Year. To simplify matters, the organisers have decided to stick to just sweets for now which are less perishable and therefore easier to deliver. They have also restricted the project to Colombo for now, but if all goes well we’re likely to see both the menu and the areas expand rapidly over the next year. For now, the Sinhalese plate consists of aasme, konde kevum, kokis, and thala karali; the Tamil plate has jelebi, rava laddu, sweet murukku, and boondi; the Muslim plate is actually a bowl of legendary watalappam; and the Burgher plate gives you the equally famous breudher.

Speaking to me, Indi Samarajeeva, one of the owners of Yamu, said that the “One Plate [Project] is an experiment to see if online food sharing can help bridge divides between communities. Sri Lankans traditionally share food at holidays with their neighbors. One Plate is an attempt to extend that behavior online.” At a time when Sri Lanka has been experiencing a new wave of ethnic tension, Indi went on to say, “We hope that people will take the chance to do something concrete to promote fraternity and goodwill among all the communities of Sri Lanka.”

2 thoughts on “Build a Bridge, One Kevum at a Time — the One Plate Project”